GRE is one of many Virtual Private Network (VPN) technologies. VPNs act like a conduit that runs between two (or more… foreshadowing!) routers where traffic can flow through as if the remote router is directly connected, even when its not. Where VPNs really show their hand is when we implement a layer of security on top of our GRE tunnel. This will protect all data flowing between sites.

From the routers perspective, a GRE tunnel is just like any other interface: it has an IP address, it can be enabled or disabled, a routing protocol can be enabled on it, and anything else a normal interface can do. The only difference: there is no physical “tunnel” cable. It is a virtual link between the two devices. The magic of the GRE tunnel is in the GRE header. It takes the original packet, with the original IP header, and adds a GRE header and a new IP header. The IP header is sent to the destination interface of the other side of the tunnel. This “protects”/hides the GRE payload from any routing. Only the new ip header is routed. 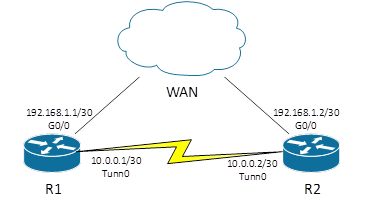 Notice how the tunnel interface is listed as any other interface. It has an IP address of its own and is treated as any physical interface.

If we were to examine the IP packet for this demonstration, it would look like this. GRE added a new header to the packet, so it could be routed over the WAN, but once it’s received by R2, the “New IP Header” is removed and sent to the tunnel interface.

Following the theme of “a tunnel is just another interface”, a GRE tunnel is configured right on the tunnel interface.

It is customary/best practice to configure the tunnel source as a port, and the destination as an IP address. This is to prevent any address changes on the source port effecting the tunnel. On the other device, there should be a mirror image of the above configuration. In other words, the tunnel source on R2 should have the address 192.168.1.2, and the tunnel destination address should be configured with the exact address of R1’s GigabitEthernet0/0 interface. There are a few other ways a GRE tunnel can operate. The above configuration only supports IPv4 GRE tunnels. To setup an IPv6 tunnel, the tunnel mode command must be issued.

Maxwell Wenger was born in Bellevue, Washington, and still lives close by. He is currently a student studying Computer Science, doing some ad hoc development and some Cisco Networking training on the side.